Okinawa is used to be a country called Ryukyu Kingdom in the past and finally became one of Japan's territory. Towards the end of World War Two, Okinawa became the stage of one of the bloodiest battle. After the war ended, Okinawa was under US administration until 1972. Until today there are still many US troops being stationed in Okinawa Island.

Okinawa cuisine differs greatly from typical Japanese cuisine. It is because of the island's unique history which was influenced by China, South East Asia, United States and Japan. Below is some of famous Okinawa cuisine. 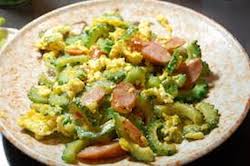 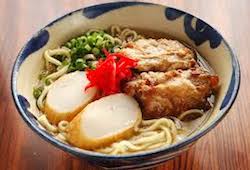 You can also find lots of taco rice in Okinawa due to Americans long influence. Taco rice is a bowl of rice consists of typical taco ingredients such as beef, lettuce, tomatoes, cheese or onions.

Rafute is a pork dish with thick cuts of meat from pig's belly that have been boiled to become very soft. Rafute is usually rich in taste and savory. 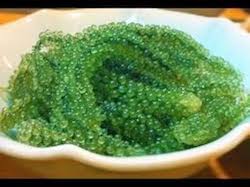 Okinawa's climate is subtropical which has 4 seasons, spring, summer, autumn and winter.
Okinawa has a great climate where it is not too hot in the summer and not too hot in the winter.
You can also enjoy sakura in spring around mid January ~ mid February.
The summer in Okinawa range around 27 ~ 35 C.
Unfortunately, since Okinawa could not turn very cold, you cannot see autumn leaves which all leaves turn into reddish or yellowish color in Okinawa.
However you can enjoy a pleasant winter which the temperature is around 10 ~ 18 C.

Okinawa has a poor public transportation. Unlike other mainland Japan, most Okinawa people are moving using their own cars. Okinawa indeed has a monorail, however it is only limited within Naha Area.

The main public transportation in Okinawa is bus and taxi. However bus costs a lot and rarely comes on times. So the best option to travel Okinawa is using sigtseeing taxi or public transport like our Easy Travel Private Transport / Taxi service.

Churaumi Aquarium
Churaumi Aquarium is located in Motobu Peninsula in northern Okinawa Honto, about 90 kilometers from
Details
Shuri Castle
Okinawa previously was not called Okinawa, it was called Ryukyu. The former capital of Ryukyu Kingdo
Details
Okinawa Marine Sports
Okinawa is famous for its beautiful seas. You can enjoy various marine sports in Okinawa such as fly
Details
Mihama American Village
American Village is a great place to do shopping and enjoying culinary. There are lots of apparel sh
Details
Kouri Island
Kouri Island is famous for its beautiful seas in Okinawa Island. It is located in the norhtern part
Details
Cape Manzamo
Cape Manzamo is a uniquely shaped rock formation on Okinawa Island, located in Onna Village. Cape Ma
Details
Ryukyu Mura
Ryukyu Mura or Ryukyu Village is a theme park that allows you to experience the whole Okinawa. You c
Details
Okinawa World Gyokusendo Cave
Okinawa World is a theme park about Okinawan culture. The theme park main attraction are a big natur
Details
Nakijin Castle
Nakijin Castle is located in Motobu Peninsula in northern area of Okinawa Honto. Nakijin castle has
Details
Hiji Waterfall
Hiji Waterfall or Hiji Otaki is located in the northern Yanbaru area in Okinawa main island. This ar
Details
Kokusai Dori / International Street
Kokusai Dori or known as International Street in English is an approximately 1.6km length of street
Details
Beach In Okinawa
Okinawa has lots of beautiful beaches for swimming, snorkeling and relaxing. The general swimming se
Details
Share Post:

Use Easy Travel when you visit Japan. We have shuttle car from airport to hotel, limousine services, private tour packages, private taxi / transports and so on.